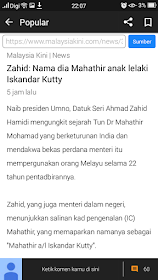 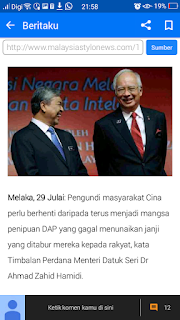 If Transformation Works Why do the Rakyat Suffer?

If Transformation Works Why do the Rakyat Suffer?

His key message: Transformation strategy works and Malaysia is in good hands. Investment keeps flowing in, jobs created, inflation and unemployment remains low, and GDP per capita is nearing high-income threshold. Only BN can provide stability.

A senior and illustrious member of our KKA (Kedai Kopi Assembly/Coffee Shop Assembly) wrote to me to respond to the Prime Minister.

[REMINDER. Anonymous comments will not be published.]

I publish below and in full his analysis.

PM Argument 1: Malaysia is getting richer. Between 2009 and 2016, Gross National Income has increased by nearly 50 percent, and GNI per capita using the Atlas method increased to US$9,850, and based on the World Bank’s latest high income threshold of US$12,235, we have narrowed the gap towards the high income target from 33 percent to 19 percent.

Comment: Data shows that the 19% gap is the same as in 2012. So basically, we are in the same spot in the past five years. Even if we compare our performance in the past two years, we are actually moving backwards, not forward towards high-income status. The gap in 2015 was 15%, but now it is 19%. In any case, being high-income is pointless. Focus should be on a developed nation status, inclusiveness and sustainability.

PM Argument 2: Some 2.26 million jobs have been created, which represents 69 percent of the 3.3-million target we want to reach by 2020. Clearly, we are making the right progress towards those goals.

Comment: (A) Most of the job created were low-income jobs, which would not make us high-income workers or high-income nation. Data from the Economic Planning Unit (EPU) shows that between 2010 and 2014, the share of skilled workers in total employment has in fact declined, from 27.6% in 2010 to 25.5% in 2014. The creation of mostly labour-intensive and low-productivity employment in the country pushed up the share of low-skilled worker to total employment from 9.5% to 15% during the same period. We create low-income jobs more than high-income jobs.

(B)Salary remains low. Last year, wages and salaries only grew by less than one per cent, or just RM17 in real terms. Half of the workers in Malaysia earn less than RM2,000 per month. For fresh graduates, starting salaries have remained largely stagnant since 2007.

PM Argument 3: Inflation and unemployment have been kept low.

Comment: Unemployment remains relatively high. Last year the number of unemployed went up by 12%. Youth unemployment rate was at 10.7% - higher than 10.2% in 2016, despite that the economy still growing. In fact, among those with tertiary education, the unemployment rate is higher at 15.3% compared with youth without tertiary education at 9.8%. Inflation is going up. Last year it was 2.1%. This year’s 1stquarter was already 4.3%.

PM Argument 4: Our currency, the ringgit, has been described by Bloomberg recently as, and I quote, “easily the strongest major Asian currency this quarter, climbing twice as much as the next best, the Chinese yuan.

Comments: If we look at the wider horizon, our currency has weakened by 42% against the US dollar between 2011 and 2016. Last year, it depreciated by 4.5% and the year before, that it was down by a whopping 23%. The ringgit has also weakened against currencies of poorer countries in the region. In the past two years - 2015 and 2016 - our currency dropped by 14% against the Philippine’s peso, 15% against Thailand’s baht, and 16% against Indonesian’s rupiah. Remember the ringgit was at 3.09 against the dollar in 2012.

PM Argument 5: the equity market there were net inflows of RM11 billion in the first half of 2017, compared to RM3 billion of net outflows during the whole of 2016.
Comment: Again, we need to widen the horizon. Between 2014 and 2016, KLCI already lost 13% of its market value.

EPILOGUE: My own feeling is the Prime Minister was being selective and, in doing so, had insulted the intelligence of the audience. Or he was duped by his speech writers into believing that his audience was made of idiots and the rakyat are fools.

He asked his listeners to look past 1MDB but he is afraid to debate the 1MDB’s so-called lapses even in Parliament where he has more members than the Opposition.

As he bragged about the FDI inflows he ignored the fact that the very investors, who helped put this country on the road to industrialisation, are leaving in droves.

Of course he wasn’t about to acknowledge that the improved ratings by the global agencies happened at the expense of the people.

He was given a good rating by these agencies because of his Economic Transformation Plan (ETP) is pro-market. Like him, these people didn't care that the GST had raised prices and impoverished the people. They only cared about profits and their fat bonuses.

A KADIR JASIN
http://kadirjasin.blogspot.my/2017/07/if-transformation-works-why-do-rakyat.html?m=1
Posted by KZSO at Sunday, July 30, 2017 No comments: