Is Anwar being bashed by the Jews or not?

Is Anwar being bashed by the Jews or not?

Datuk Rocky thinks so.. but only sarcastically, I think 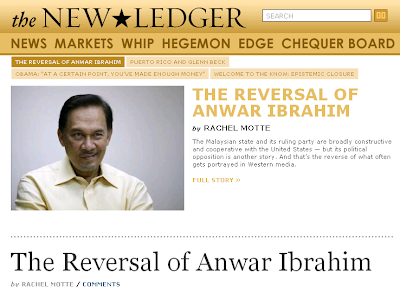 I particularly like Barking Magpie's post... he says that BABI has been branded anti-semitic... he he he well the JEws should now that BABI is haram for them too... who asked them to take this BABI as their pet....

but fellow blogger Melayu Bersatu thinks it is all just a big wayang.

The Ledger is some obscure online rag... no one outside the Jewish community reads it.. I haven't heard of it before and I can bet that you haven't either unless you are a Zionist watcher, in which case you would know it

I know that big brother Rocky, who is also my boss is a seasoned Journo andParpukari is a top blogger these days but I have to go with United Malay here... I think something is fishy and not quite as it seems

The Reversal of Anwar Ibrahim

The Reversal of Anwar Ibrahim

his week, Barack Obama reached out once more to the Muslim world. Following his promise last June in Cairo, President Obama hosted a Summit on Entrepreneurship, “to identify how we can deepen ties between business leaders, foundations and social entrepreneurs in the United States and Muslim communities around the world.” Bringing together 250 participants from 60 countries, the Administration once again tried to build bridges between East and West, and even brought Secretary of State Hillary Clinton along to close the summit on Tuesday evening.
Yet it remains as hard as ever to figure out who are America’s real friends and allies in the Muslim world, aside from the good King and Queen of Jordan, a handful of emirates, and the Saudi royals. Take the strange case of Malaysia, for example. The Malaysian state and its ruling party are broadly constructive and cooperative with the United States — but its political opposition is another story. And that’s the reverse of what often gets portrayed in Western media.
The present Malaysian leadership is pro-business, pro-American and prepared to stand up and be counted in the Muslim world as a strategic U.S. ally. During the recent Nuclear Security Summit in Washington, Malaysian Prime Minister Najib Razak pledged to assist Washington on numerous fronts, and even shut off petroleum supplies to Iran within hours of returning home to Kuala Lumpur.

Though Malaysia isn’t quite as far along as Muslim nations such as Jordan or Egypt with respect to Israel — it refuses to recognize the Jewish state or its passports — its official anti-Israel position does not come from a societal wellspring of anti-Semitism. Though Malaysia used to have a small Jewish community of its own, it dwindled as a consequence of the Second World War rather than, as in most of the Muslim world, as vengeance for Israel’s founding.

Malaysia’s reputation as a majority-Muslim nation known for moderation and stability is hard won in this decade, and a result of the leadership of the present Prime Minister and his immediate predecessor.

Prior to October 2003, Malaysia’s position as a responsible member of the community of nations was less certain. This was thanks to the country’s former Prime Minister Mahathir Mohammed. Even in power, Mahathir was a well-known anti-Semite and anti-American.

This past January, Mahathir declared that the September 11, 2001 attacks on the United States were “staged as an excuse to mount attacks on the Muslim world.” He didn’t stop there. Speaking at that same month’s General Conference for the Support of Al-Quds (that is, the Arabic name for Jerusalem), he declared that Israel was created to solve “the Jewish problem” in Europe after Hitler failed to complete the Final Solution. “Even after their massacre by the Nazis of Germany,” said Mahathir, the Jews “survived to continue to be a source of even greater problems for the world.”

The case of Mahathir isn’t merely one of a has-been politician with a penchant for vile Jew-baiting. He still retains influence with hardliners. And the man whom he mentored, and then repudiated, is now leader of Malaysia’s political opposition — and he’s showing the world how well he learned under Mahathir’s tutelage.

Anti-Semitism is now resurgent in Malaysia thanks to opposition leader Anwar Ibrahim, a charismatic firebrand of a politician who collaborated with Mahathir — as a deputy prime minister and top aide— for nearly a decade in a relationship that Ibrahim described as being one of “father and son.” In 1998 Ibrahim got impatient about taking over from Mahathir, embarked upon a power struggle, and lost. For his troubles, Mahathir put him on trial for corruption and sodomy: and Anwar Ibrahim ended up in jail at the hand of his mentor.

pon his release, Anwar Ibrahim came to Washington, D.C., and has spent the past decade cultivating a genteel, enlightened image in the West. Otherwise informed American observers of foreign affairs have adopted him as an exemplar of liberal Southeast Asian and/or Muslim democratic governance. Just a few years ago, he was invited to teach for a year at Johns Hopkins School of Advanced International Studies, from which he cultivated the acquaintances of eminent Jewish Americans like Paul Wolfowitz — as a means of showing just how far behind him was his own militant Islamist past.

Indeed, as recently as 2008, Al Gore — usually a savvy and perceptive man — could be found posting on his blog in defense of Ibrahim’s dignity in the face of criticism. That’s big-name Western approval one can’t buy — but one can work hard for it with the right enemies and media outreach inside the Beltway.

It also helps if one knows what to tell Western audiences who tune in to Western media outlets. This past March, in an interview with CNN World, Ibrahim told Wajahat Ali, “Stoking the flames of anti-Americanism and anti-Semitism is a good distraction from the stench in [Muslim societies’] own backyard, namely rampant corruption, denial of basic human rights, abuse of power and the suppression of civil society.”

The reality is that if you’d asked a well-informed American who the liberal democrat was in Malaysia between 1999 and 2009, he or she might well have said, “Anwar Ibrahim.”

But does Anwar Ibrahim’s portrayal of himself outside Malaysia match Anwar Ibrahim’s actions within his own country? Unfortunately, Ibrahim has decided to make his mark in domestic Malaysian politics — away from CNN, Al Gore, and Johns Hopkins — as an anti-American, anti-Semitic demagogue.

The proximate cause of Ibrahim’s descent into the foul rhetoric of anti-Semitism was his decision to exploit the government’s hiring of a Washington, D.C., public relations firm, APCO, to do minor communications work within Malaysia. Like many international firms, this one has done business within Israel, and even counts among its senior personnel persons of the Jewish faith.

Ibrahim has now effectively trashed his old friends in Washington and has used this PR contract as an excuse to spin a dark conspiracy theory of Jewish control, Zionist plots, and subversion.

Ibrahim’s lieutenants have charged, among other things, that the Malaysian government has “engag[ed] a company that has a close tie with the Zionist regime in Israel. Its advisory panels consist of former security chief of the Israeli government, and many of their staff are formerly from the Israel Security Agency,” and that “its operators in Tel Aviv have close links to the Zionist regime.”

Ibrahim himself has delved headlong into anti-Semitic theorizing, publicly alleging that there are “Israeli intelligence personnel in the Police IT unit.” Worse, he connected his anti-Semitism to his anti-Americanism, when he angrily denounced the Malaysian Prime Minister’s politically courageous decision to stand with President Obama and cut off oil supplies to an Iran seeking nuclear weapons. Ibrahim stood in the legislature to charge that the supposedly “Jewish-controlled” PR firm hired by the Prime Minister was, in fact, working to manipulate Malaysian policy on America’s behalf.

Ibrahim angrily demanded: “How can our foreign policy have changed dramatically,” unless Jews were controlling Malaysian affairs for America’s benefit? “Our policy on Iran shows how weak we are. Unprecedented in the history of our country, even Mahathir Mohamad himself never shifted in Afghanistan and the Palestinian question.”

Remarkably, Ibrahim closed his statement with oblique praise for Mahathir — the man who shaped Ibrahim’s core thinking on things Jewish and American.

This is not the first time Ibrahim has gone down this road: he has a history of Jew-baiting when expediency calls for it. To pick just one example, in 2008, with Malaysian elections approaching, he casually tossed out this charge in an interview with IslamOnline: “I have evidence proving that the government is backing the Jewish lobby in the U.S. and some parties inside Israel.” (To the credit of the Malaysian electorate, Ibrahim’s opposition coalition failed to win a majority in that election.)

And as scholars of terrorist finance like Ilan Weinglass have documented, “Anwar Ibrahim is a founder and director of the Muslim Brotherhood affiliated International Institute of Islamic Thought (IIIT), a think tank in Virginia that has alleged links to terrorism.” In 2002-2003, Ibrahim’s institute in Virginia was even investigated by the FBI, IRS and CIA for alleged financing of Hamas and Hizbollah.

In looking for America’s friends in the Muslim world, it’s often difficult to know the Good Guy from the Bad Guy. But it’s a good rule of thumb that the politician promulgating anti-Semitic conspiracy theories is not a friend of America.

In Malaysia, the events of the past few months have made it crystal clear a strange role reversal: it’s opposition leader Anwar Ibrahim who is whipping up anti-Semitic sentiment — and it’s Prime Minister Najib Razak who is, for better or worse, standing firm with President Obama and the United States.